Posted by Joshua Fairlie at 17:23 No comments:

C504 gets some treatment and a change of identity.

Hello again, my sleepwalking army of the undead.....

Been a bit of action on the workbench this week, in that I've dragged out another long term project in the form of an Austrains C class that I am superdetailing. I removed almost all the molded hand and grab rails, lift rings and (I think it was meant to be an) antenna, horns, wipers and hoses. Now I've begun the process of fabricating new hand/grabrails, the MU hose and coupler lift bar.

I have also fitted the Evolution Models Kadee couple adapter/pilot filler chich is a brilliantly designed piece of kit and only need a very slight sanding to make the kadee draft gear fit. The pilot filler/mount slotted straight onto the pilot without modification. Excellent stuff.

The brutalised 'donor' loco C504 with the modeled detail removed. The cowcatcher/pilot was hit with a dremel and I like the dented effect. 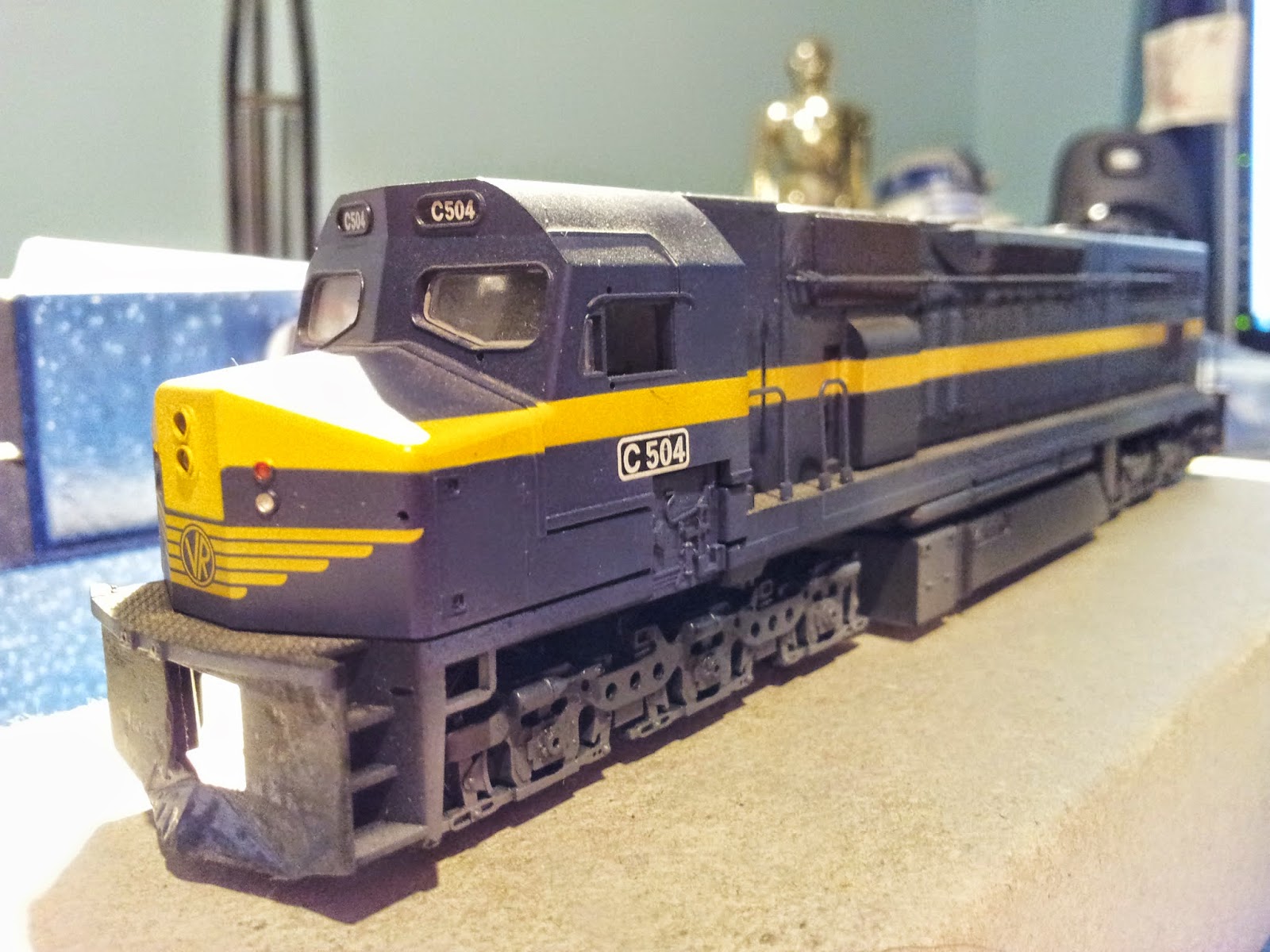 A blurry close up of the pilot 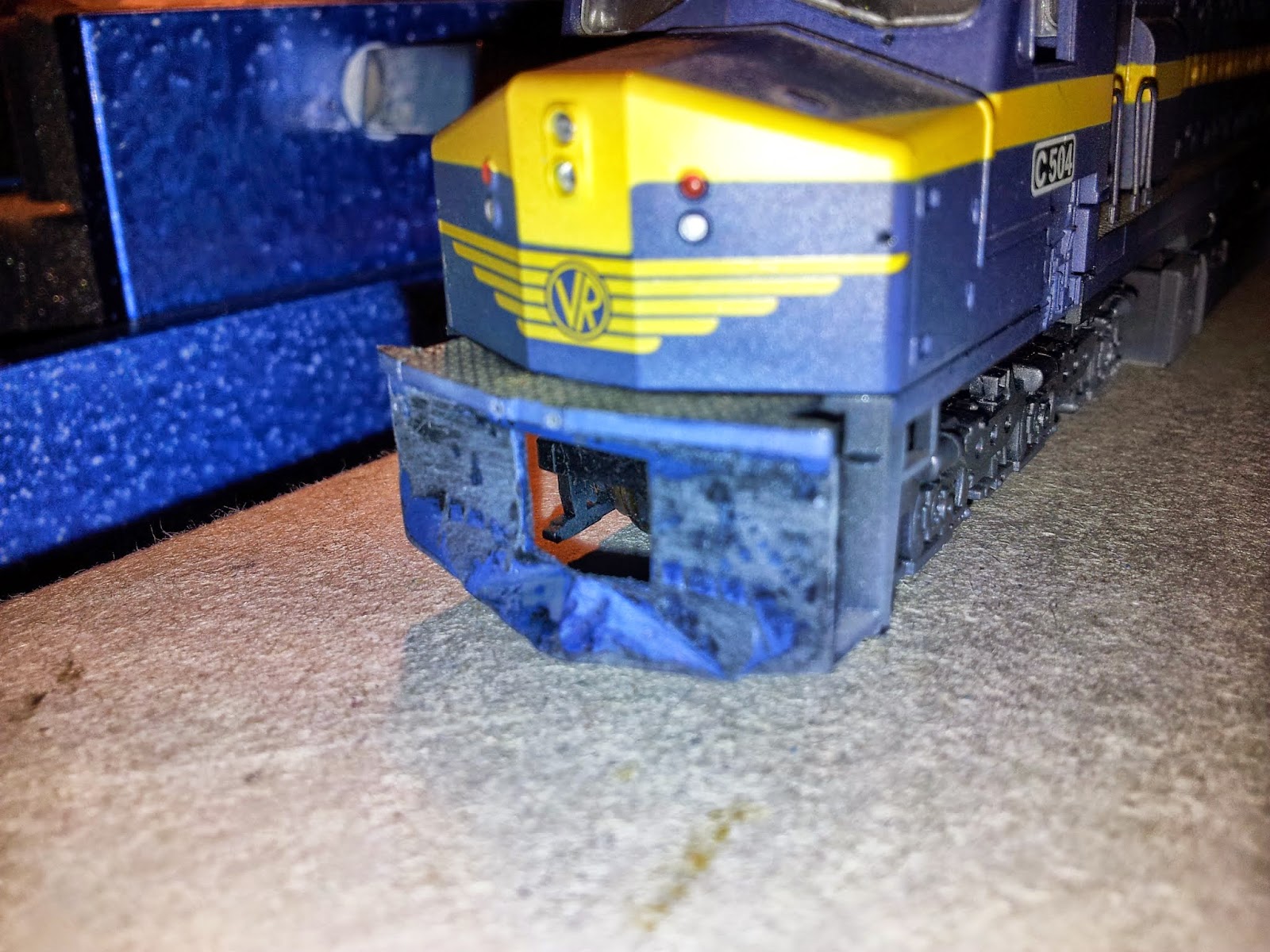 A change is as good as a new running number. 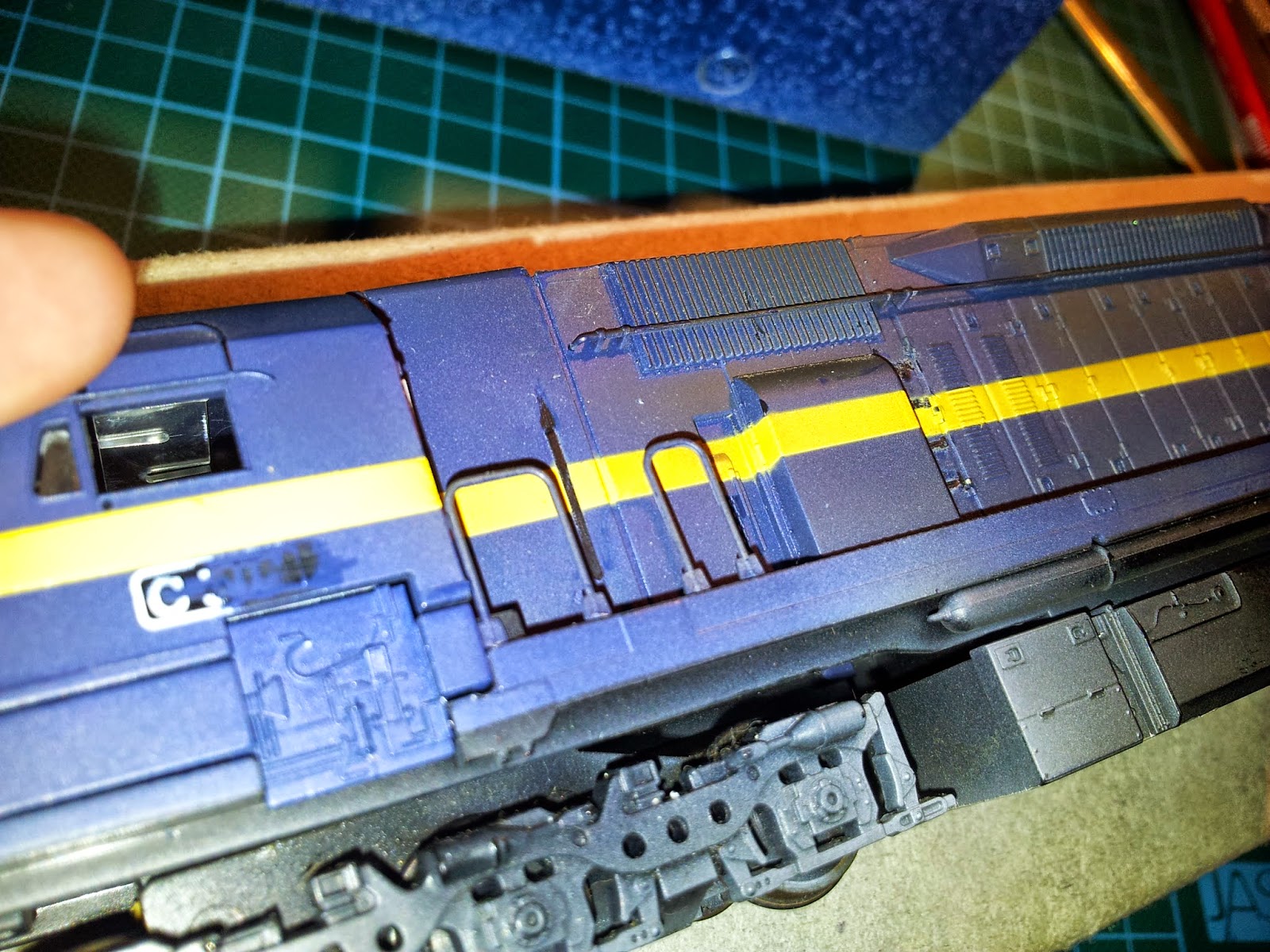 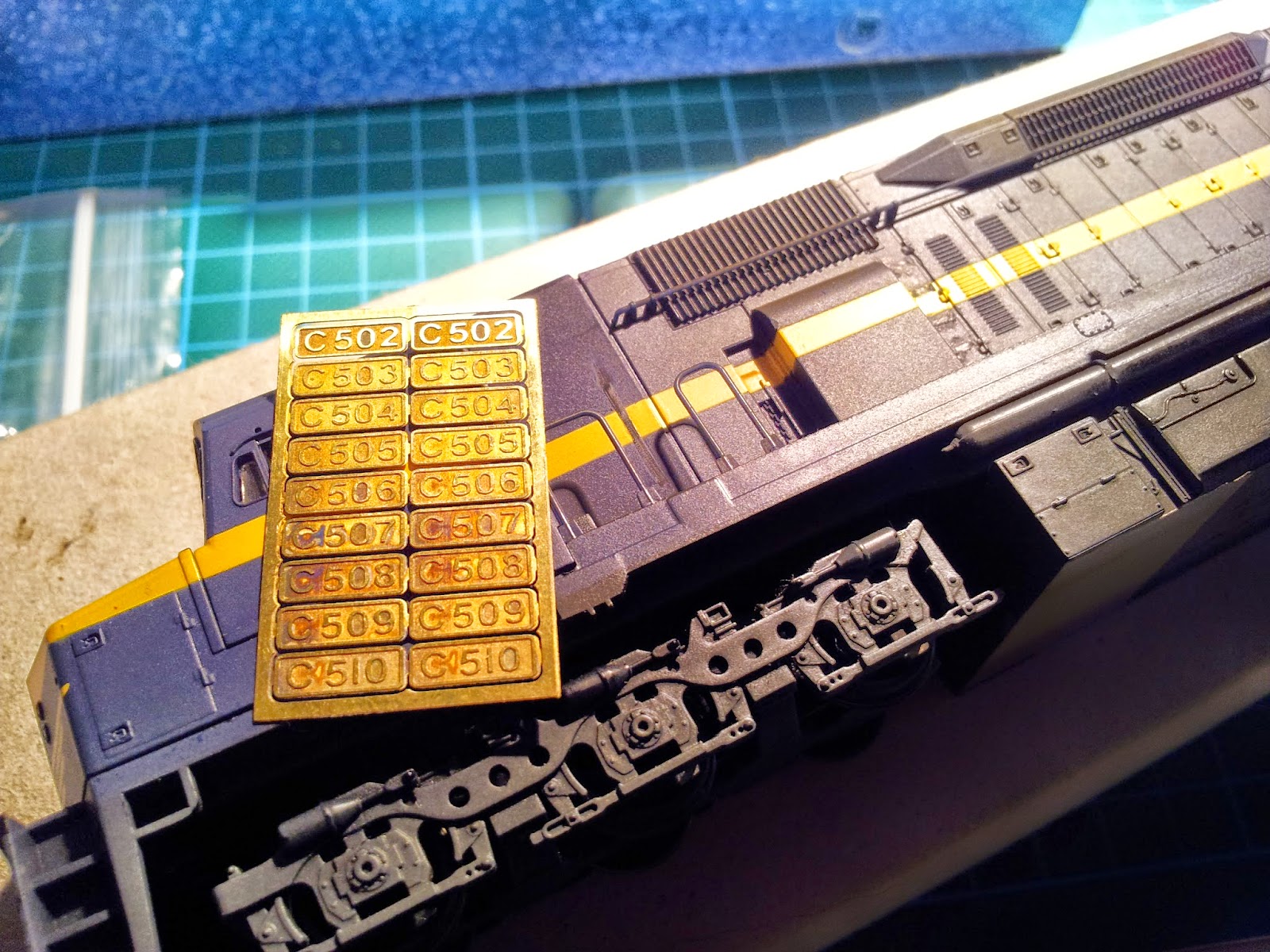 Fabrication of the nose handrails begins. 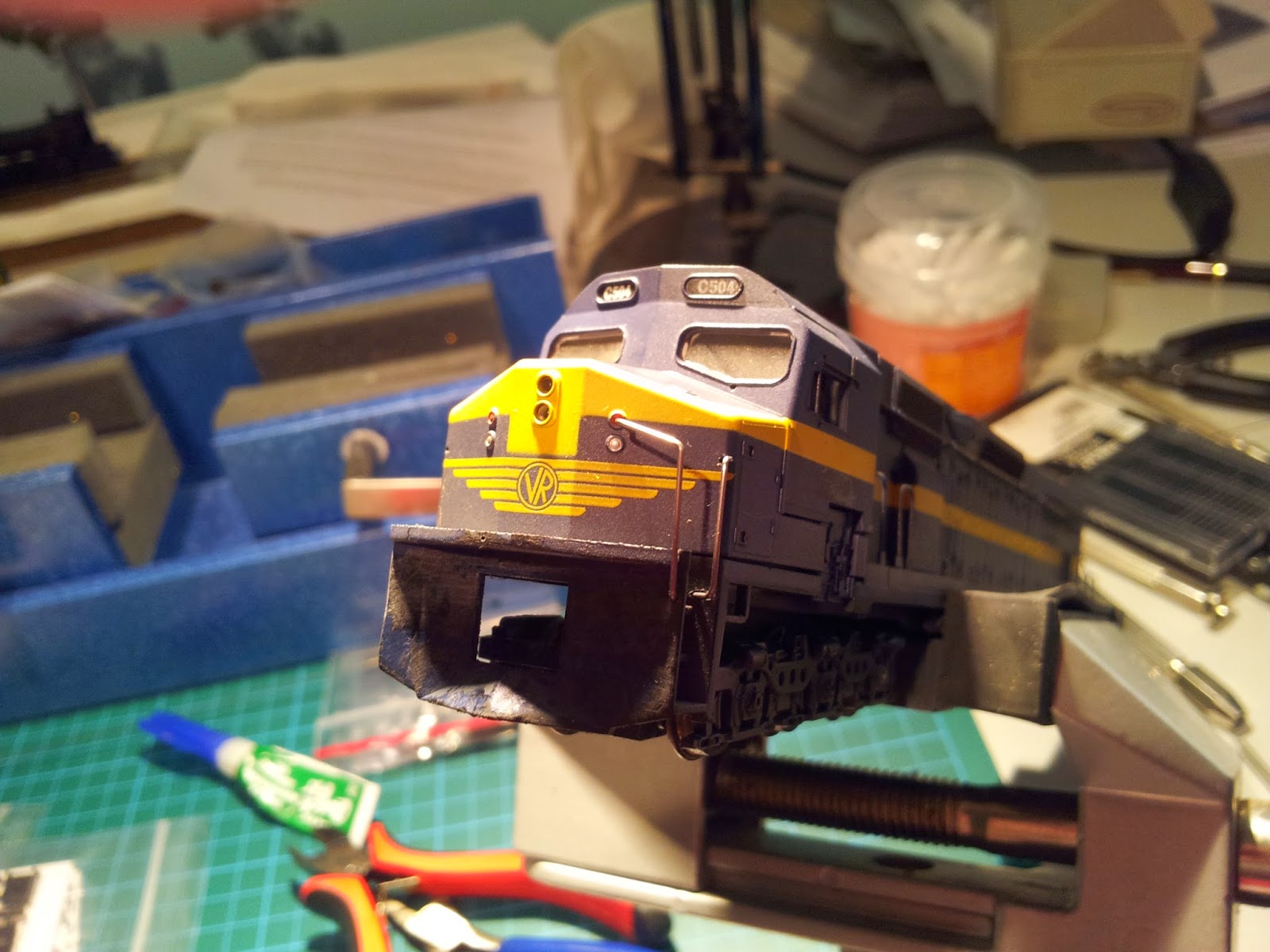 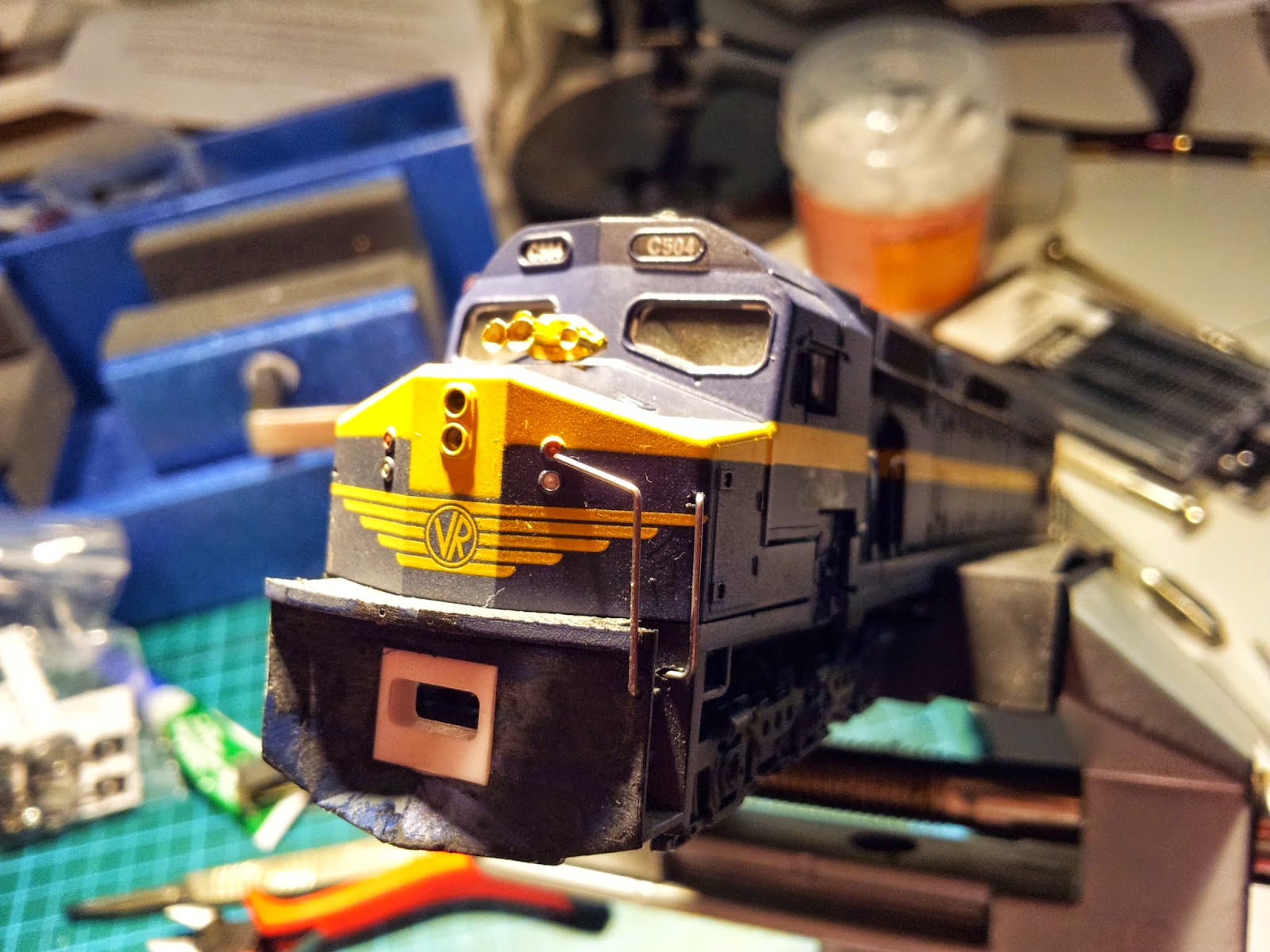 Kadee #158 in place, MU receptacles in for a test fit and the fabricated
coupler lift bar in place 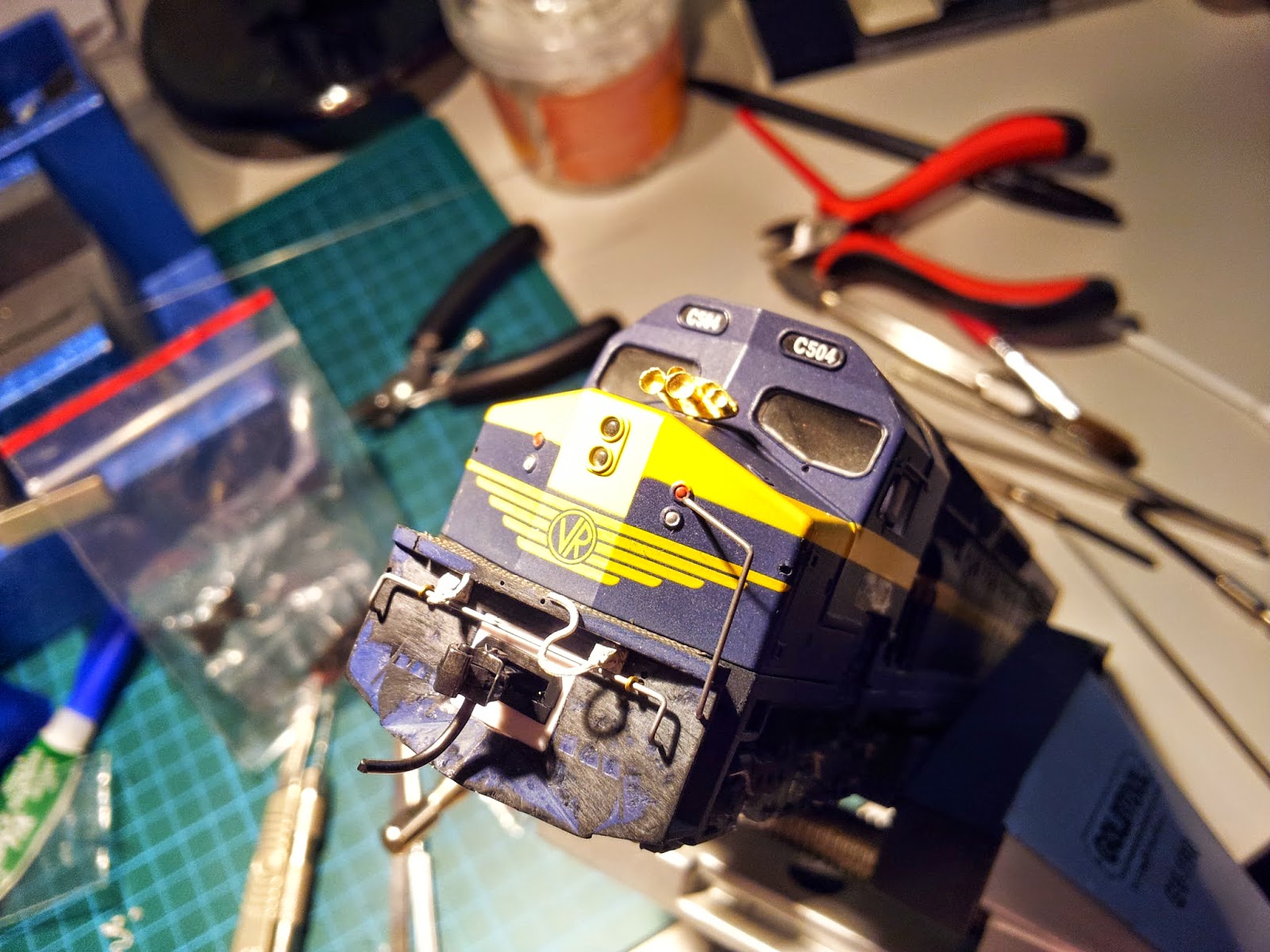 ...and an MU cable created out of soft wire bent to suit. Hoses,
'radio equipped' decals, more handrails including the nose grab rails, antennae, wipers, sun visors, paint and more weathering... more to come. You get the idea! 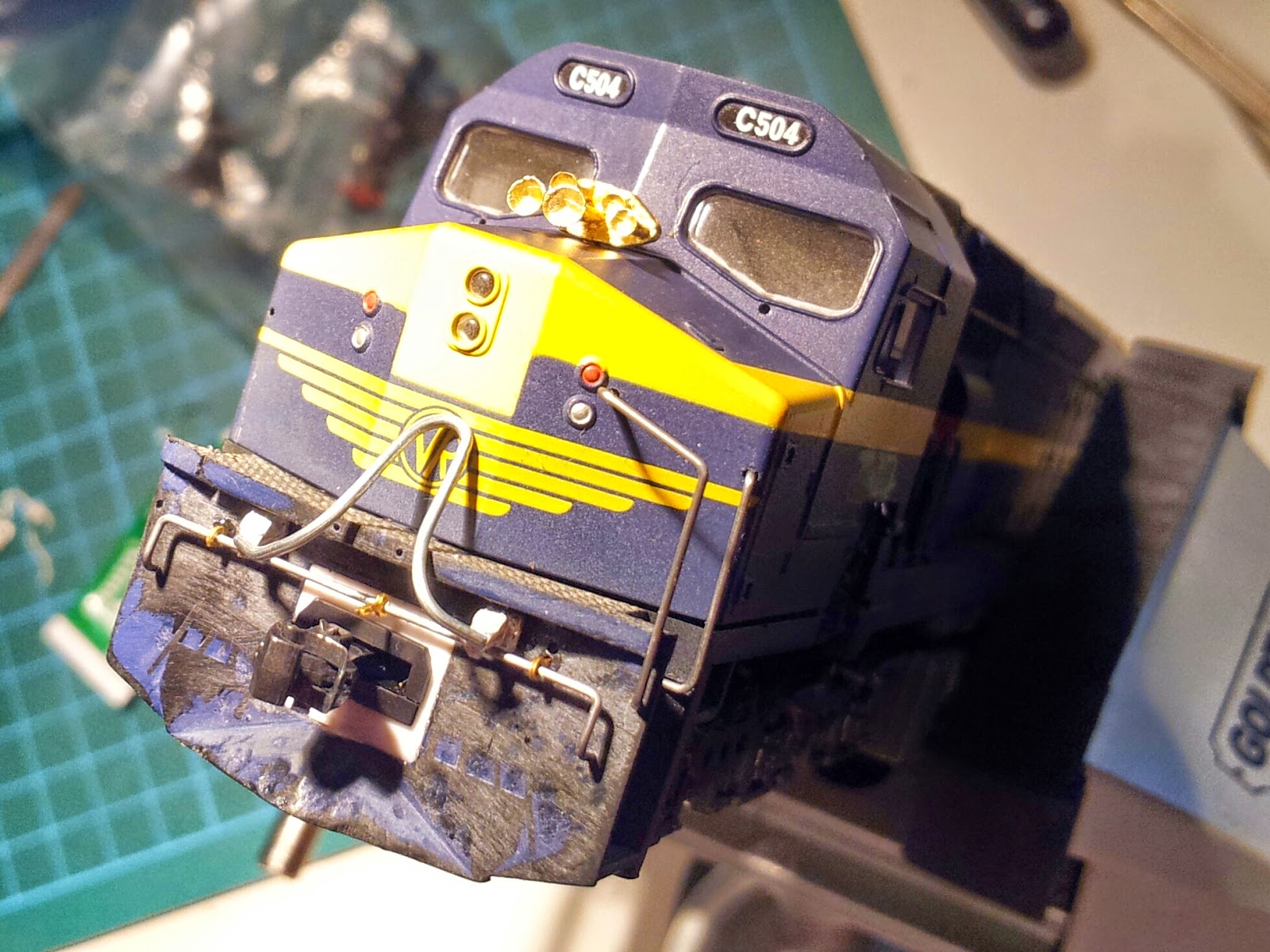 Technically this is my first superdetailing effort on a loco, although the first fabrication work was on the 700. Not bad though, I like where it's going.

Cheers!
Posted by Joshua Fairlie at 15:20 No comments: 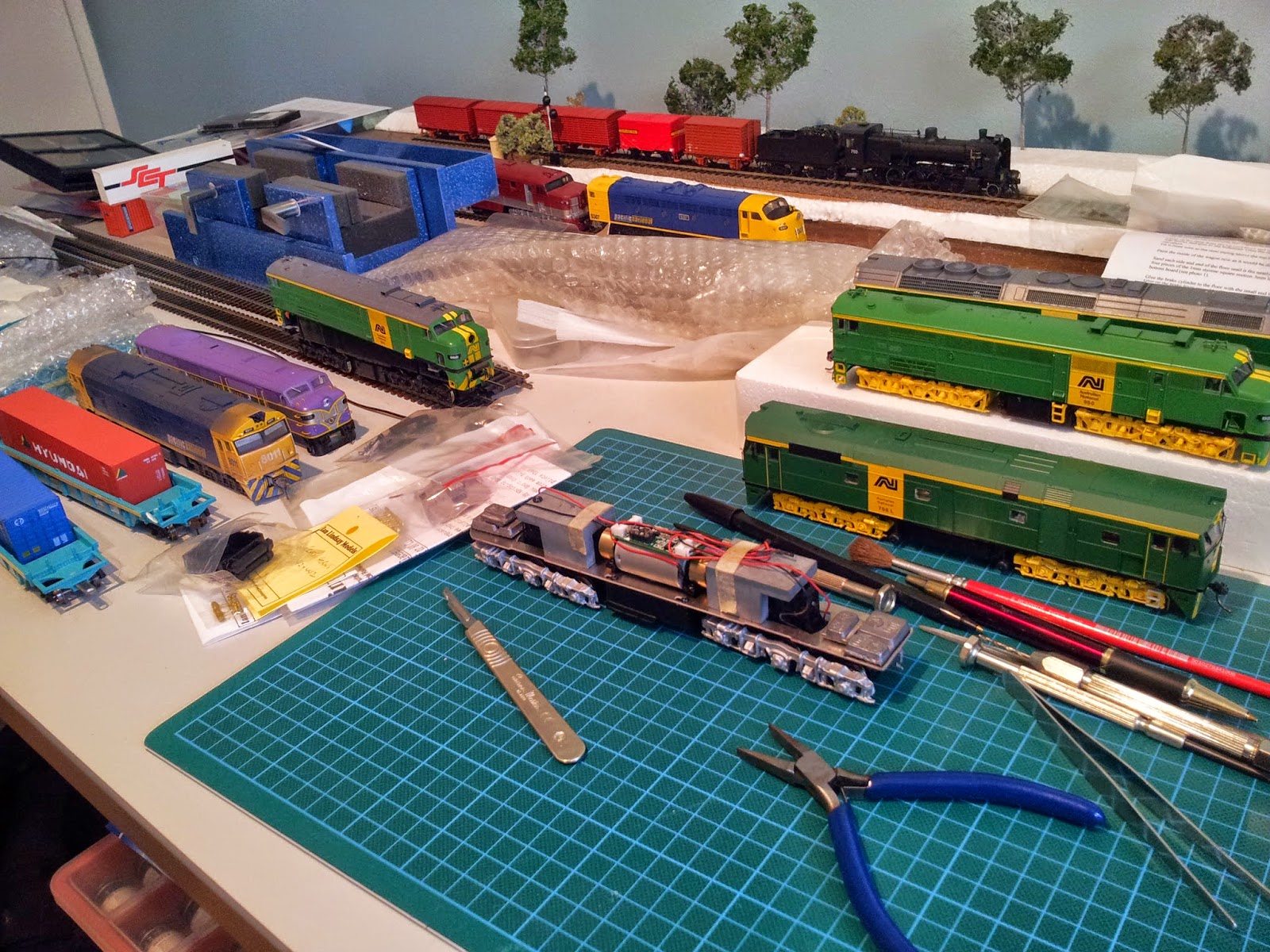 Posted by Joshua Fairlie at 12:30 No comments:

I've done a little bit of work since my return from the colder climes on 'sunny' Melbourne and the 'tropical' Gippsland...

706 (likely to be renumbered to 703) copped a bit fabrication work in the form of bent brass wire in different gauges and some steps courtesy of ILM. I know the 'brake piping' and 'sand pipe' are not strictly prototypical - and I should have replaced the brake cylinders as well, oh well - they are there to add some detail and depth to the otherwise flat and boring bogie sideframes. I like the effect and it will doubtless look better when it's all painted and weathered. The coupler lift bar is also incorrect and a bit rough but when the hoses are on, it will help to flesh things out a bit. Air and MU hoses, blinds/sunshade/visors, the correct horns, lift rings and antennae plus correcting the nose stripes and AN 'snail' and replacing the nose grabrail are yet to happen. Oh and staff exchangers and destination boards. 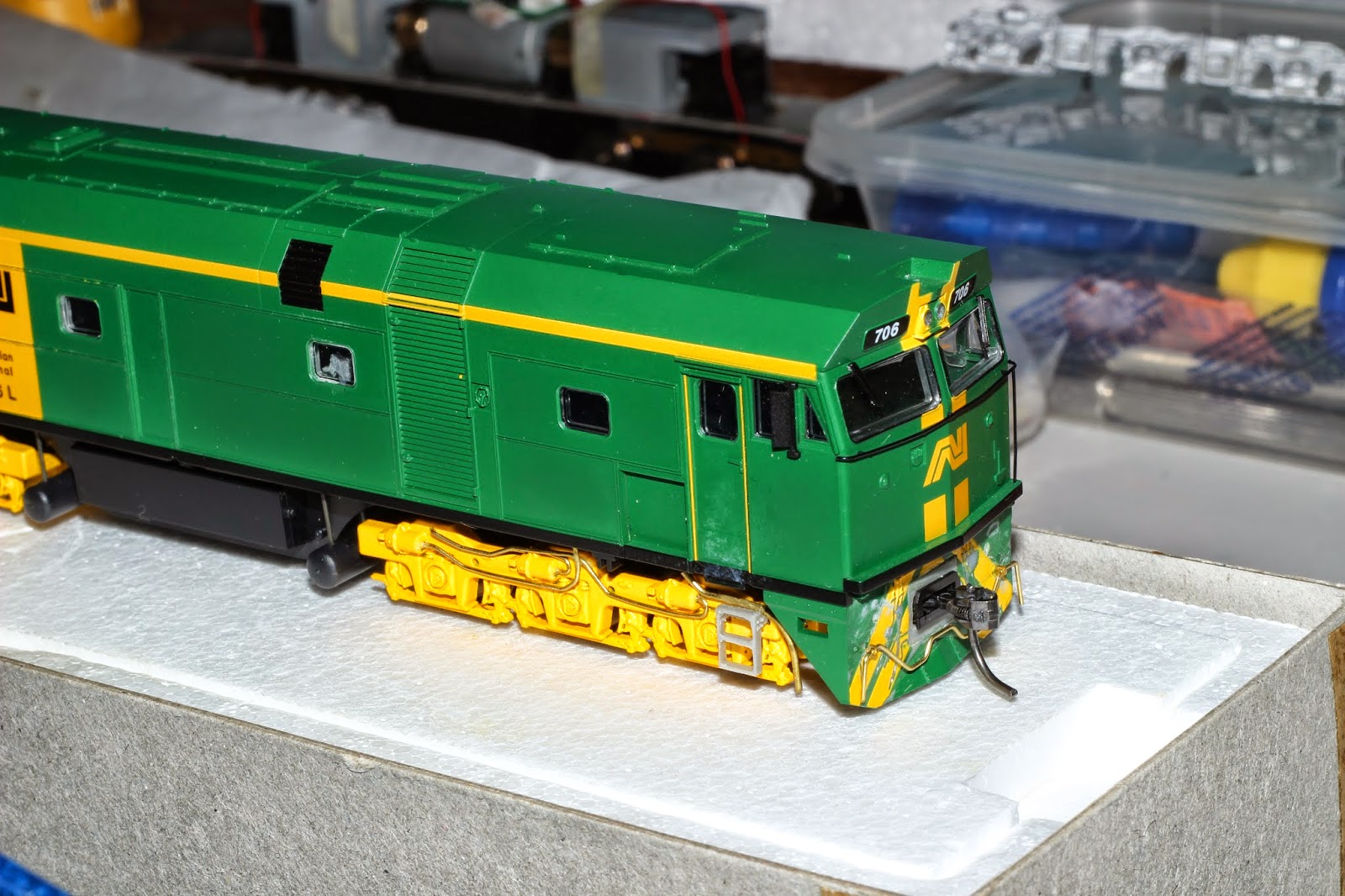 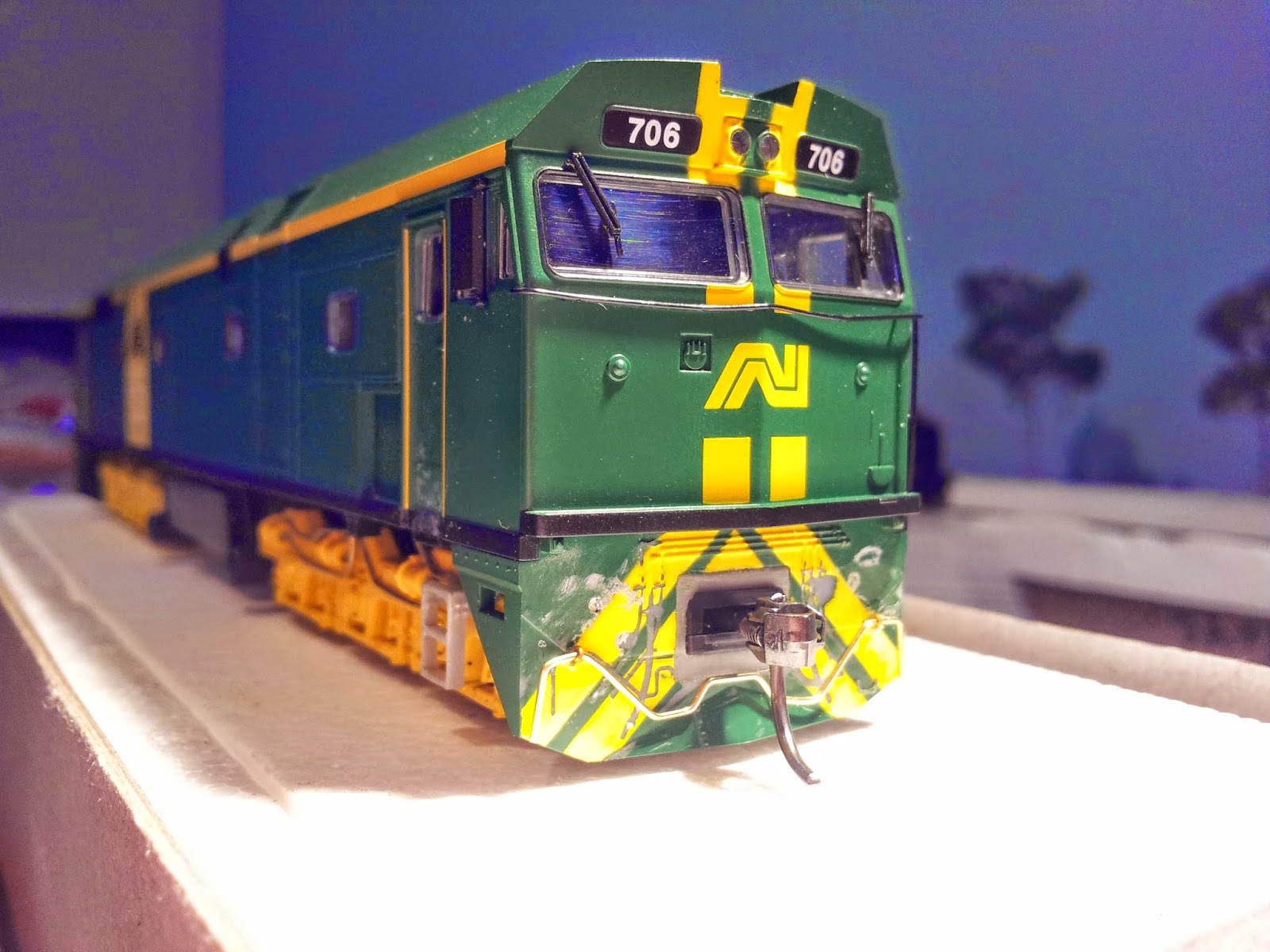 Another 'long term' project is an old Powerline BL 26 "Bob Hawke" model that I've been chipping away at. The ultimate plane is to retrofit a an excellent Proto 2000 SD45-2 mechanism that I have sitting around. It is going to require some serious work to make it fit (modified chassis and driveshafts etc). But in the meantime I've just bee detailing the body.

From the photo you can see the standard horns have been replaced with cast brass ones, the nose grabrail has been replaced (not attached yet, just posed on the loco!) with a fabricated wire one in attempt to make it 'squarer' and a Powerline Kadee adapter pocket has been fitted.... which was a pain in the arse and required a bit of mucking around and a lot of filing to make it fit and for the #58 coupler to sit at the required height to meet the Kadee coupler height gauge. Underset shank couplers would be a logical and simpler solution!

Flush glazing is waiting in the wings as are visors, hoses, lift rings, antennae, coupler lift bar etc. LEDs and DCC control with sound will follow if I am happy with the final result of the detailing. 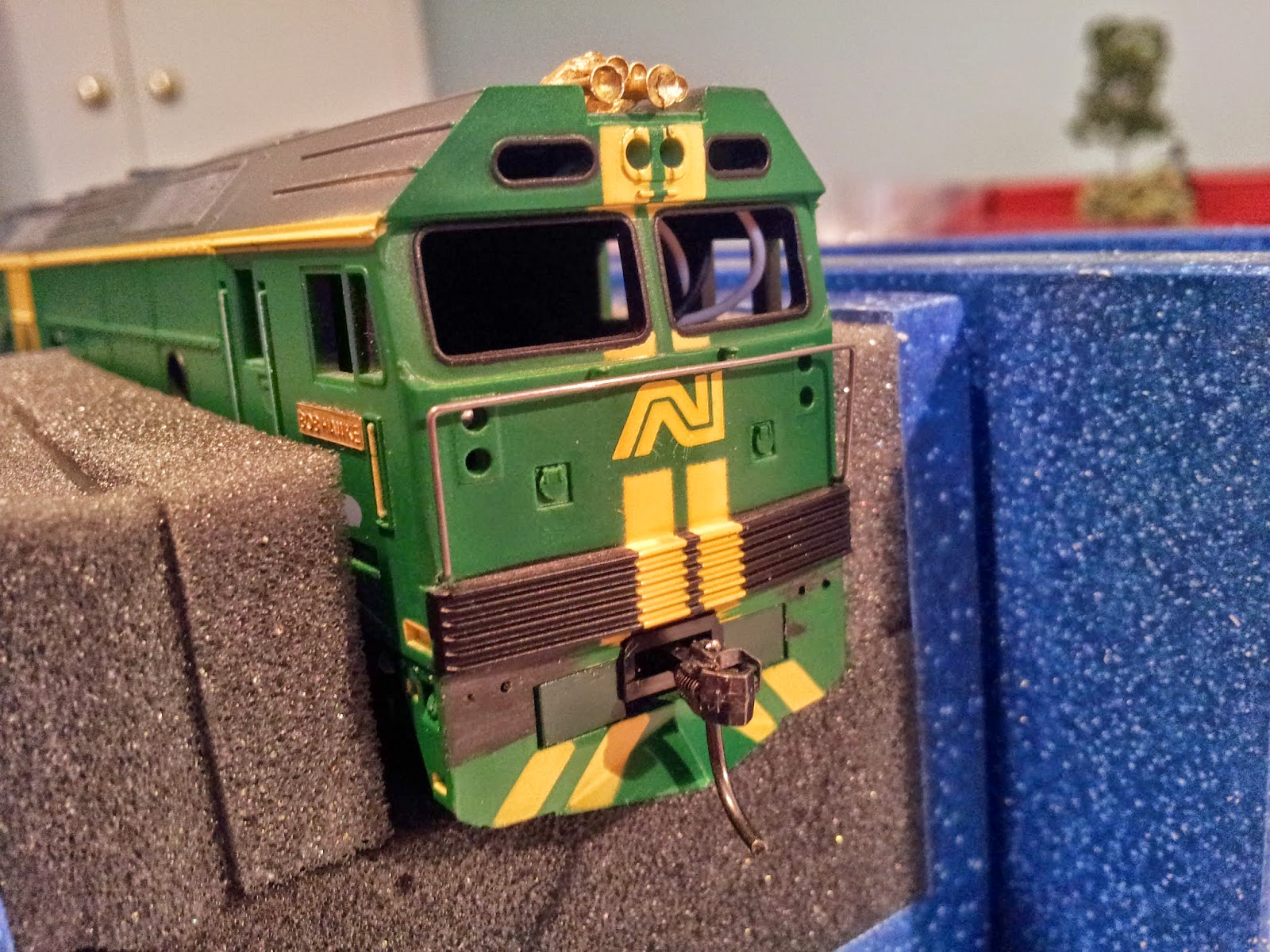 Posted by Joshua Fairlie at 12:50 No comments:

Posted by Joshua Fairlie at 13:27 No comments: 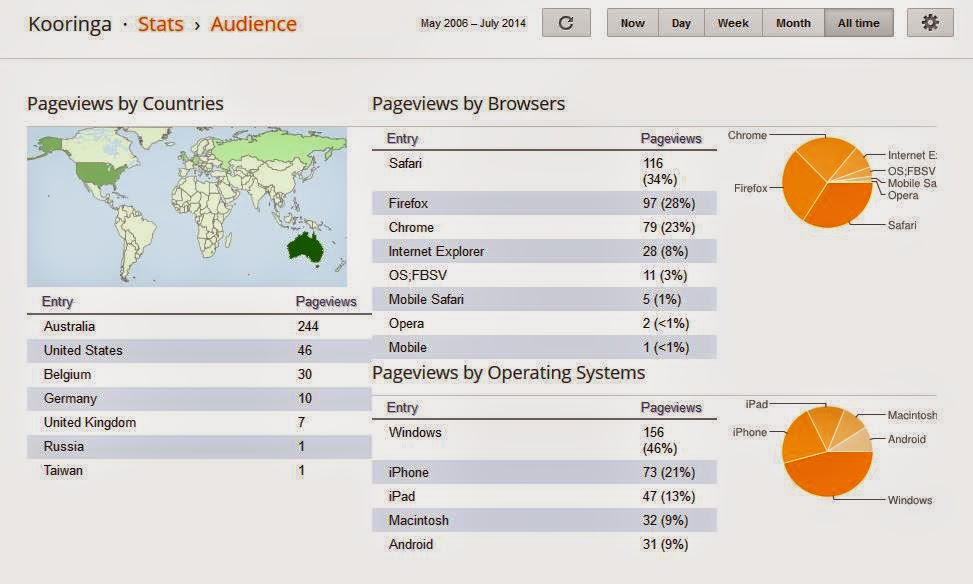 Well, there you go. The stats on you, my audience! Amazing! :)
Posted by Joshua Fairlie at 01:12 No comments:

Just a quick note to say I've been working interstate the last couple of months and hence I have done little in the way of modeling/blogging. I did do a little bit of work on the 700 last weekend, however and I will be posting some shots shortly.

Cheers!
Posted by Joshua Fairlie at 19:02 No comments: